Summary
The Little Nahanni Pegmatite Property is in the NWT, adjacent to the Yukon border and
some 39km WNW of the Canada Tungsten mine. The prospect comprises 5,393 ha (53.93 km2) consisting of a system of branching swarms of dykes that extend over 13km exposed strike length and up to 500m width. Individual dykes within these swarms`are mostly 1-10m thickness. Natural exposure and drilling has demonstrated a vertical extent of 300m. Minerals of interest are spodumene, lithium micas, tantalite-columbite and cassiterite. Grades of up to 2% Li2O and 500g/t Ta2O5 are reported for individual dykes. The property has been explored sporadically since 1979. This work included soil and stream sediment geochemistry, chip and channel sampling of cliff faces and 1,798m of diamond drilling. With the current increase in the demand of Li and Ta the property has become a significant prospect. Equitorial Exploration Corp. optioned the claims in 2016 and commenced exploration with a carefully executed channel sampling programme that was performed by Archer Cathro and Associates (1981) Limited (Archer Cathro).

To date no estimate of reserves that would be NI 43-101 compliant has been made. Future work would be best aimed at developing adequate grade data. The 2016 channel sampling is adequate for inclusion in a database of dimensions and grade. Further sampling using accurate surveying and documentation is needed. The property is large enough that many diamond or percussion drill holes will be required to build up a compliant resource. These may best be sited according to results of surface channel sampling. Testing of the mineralization at depth is also an obvious target. 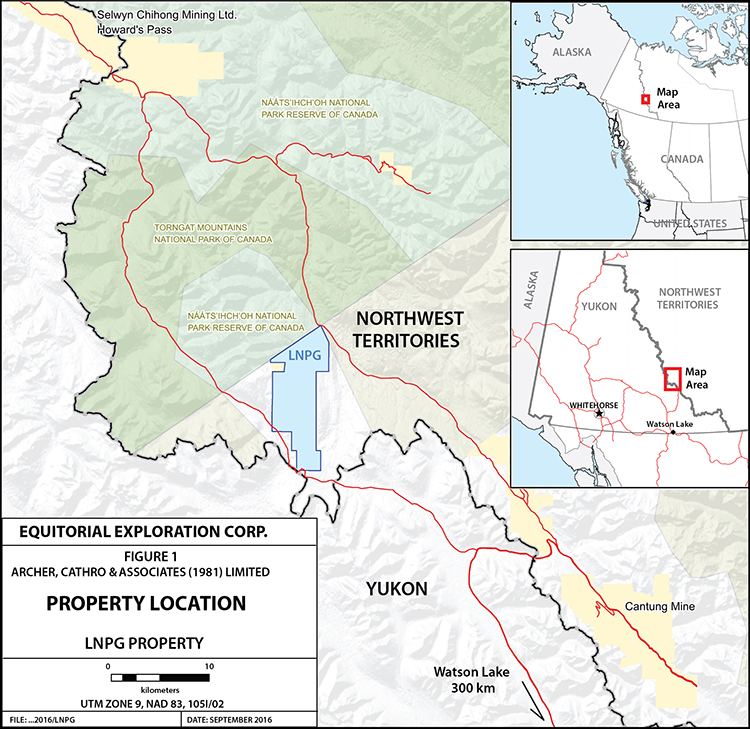 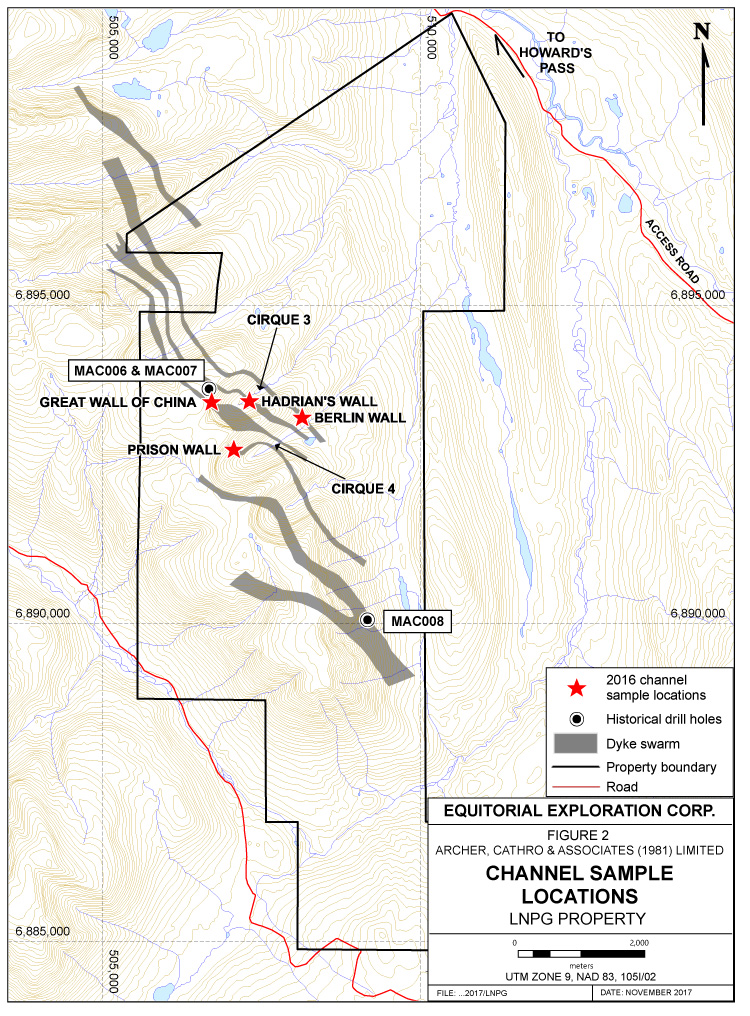 2016 Sampling Program
In 2016 Archer Cathro carried out channel sampling across the various main pegmatite zones on behalf of Equitorial Exploration (Figure 9). Equitorial`s September 6, 2016 news release stated:
“During the 2016 field program, a total of 81 channel samples were cut across dyke swarms in two cirques (3 and 4) on the LNPG property. The samples were cut using a hand-held rock saw. Channel samples are considered the most representative way to test surface exposures and are akin to diamond drill core in size and purpose. Channel samples were collected from the Prison Wall, Berlin Wall, Great Wall of China and Hadrian’s Wall dyke swarms within cirques 3 and 4. Highlights from individual dykes within and adjacent to dyke swarms include:

The dykes are separated by sedimentary wallrocks including quartz sandstone, limestone and shale, which do not contain significant amounts of any elements of interest. Weighted average grade calculations for channel sampled intervals are reported in the following paragraphs. Wallrock separating individual dykes within dyke swarms was sampled in Cirque 4, and the values reported were uniformly low. When calculating weighted average grades for the dyke swarms, the wallrocks were assigned zero values for all elements. Weighted averages reported for dyke material within the dyke swarms omitted wallrock dilution. 43-101 - Interpretation and Conclusions
The Little Nahanni pegmatite prospect contains a system of Lithium-Caesium-Tantalum-
type pegmatite dykes that crop out over a strike length of 13km in seven separate groups within the present property boundary. Spodumene and to a lesser extent the micas are potential lithium sources. Accessory tantalite-columbite and cassiterite contents have sufficient grades to bring the rock to within potentially economic values. Continuity of the dykes over a vertical range of 300+ metres is demonstrated by natural exposure and past drilling. So far the greatest thickness of a single dyke encountered is ≈10m, encountered in drill holes 6 and 7. The thickness of each`swarm`of dykes is up to 300m. The most reliable channel sampling has been that performed in 2016. Careful measurement of dyke width and host rock intervals have enabled bulk grades tobe calculated. Such results as 10.35m at 1.13% Li2O, 71.1 g/t Ta2O5 and 0.03% SnO2 are highly encouraging.

The pegmatite system has not been investigated to depth. The potential exists for dykes to coalesce below the level of the lowest cirque and grade could well be different. Closer to the postulated buried intrusive source for the pegmatite beryl could become significant. There is also the possibility that greisen has been developed in the upper portion of the granite, with potential for Sn and W. Drilling of several deep holes along the extent of the system is desirable.

43-101 - Recommendations
The author of the 43-101 considers the following recommendations, made by Heather Burrell of Archer Cathro to the Company in September 2016 to be very pertinent and still relevant: “The following steps would be beneficial for the advancement of the LNPG property:

Cat Lake Mineral Project
QMC Quantum Minerals Corp News Release September 7, 2017 reported:
“Between 1953-1954, the Lithium Corporation of Canada Limited drilled 25 holes into the Irgon Dike and reported a historical resource estimate of 1.2 million tons grading 1.51% Li20 over a strike length of 365 meters and to a depth of 213 meters (Northern Miner, Vol. 41, no.19, Aug. 4, 1955, p.3). This historical resource is documented in a 1956 Assessment Report by Bruce Ballantyne for the Lithium Corporation of Canada Ltd. (Manitoba Assessment Report No. 94932). This historical estimate is believed to be based on reasonable assumptions and the company/QP has no reason to contest the document’s relevance and reliability.”

The property lies within the east-trending Mayville-Cat-Euclid Greenstone Belt (“MCEGB”) located along the northern contact of the Maskwa Lake Batholith. This northern greenstone belt has a similar structural geological setting as the Bird River Greenstone Belt (“BRGB”) which is located along the southern contact of the same batholith, and is parallel to and approximately 18km to the south of the MCEGB. The property is located 20km north of the Tanco Mine Property. The BRGB hosts the world-class Tanco rare element-bearing pegmatite dike as well as numerous other lithium bearing pegmatites. The Tanco Mine went into production in 1969 and produced tantalum, cesium and spodumene (lithium). It was previously North America’s largest and sole producer of spodumene (Li), tantalite (Ta) and pollucite (Cs).

Maps of the claims:
http://equitorialexploration.com/wp-content/uploads/2018/01/Cat-Lake-Claims-Maps-3.pdf

Summary
Equitorial (EXX) is investing C$1.5 million into Mag One Products Inc. (MDD) in return for 1,666,667 MDD shares including one full warrant exercisable at C$1.10 within one year.

EXX has a first right to a 50/50 joint venture to finance equally the construction of the first magnesium and refining production facility for use by MDD to produce magnesium metal and related products, by using its proprietary magnesium metal technology upon EXX completing its investment of C$1.5 million to MDD.

EXX will also have the right to finance other production facilities on a 50/50 joint venture, on a non-exclusive basis, with MDD once the first two facilities are financed and in operation.